Discuss the problems with your X5 (E53).
Post Reply
16 posts

So following on from my post about coolant hoses, I have now removed the engine from the x5 (it's actually been out over a week I've just not had time to touch it.) 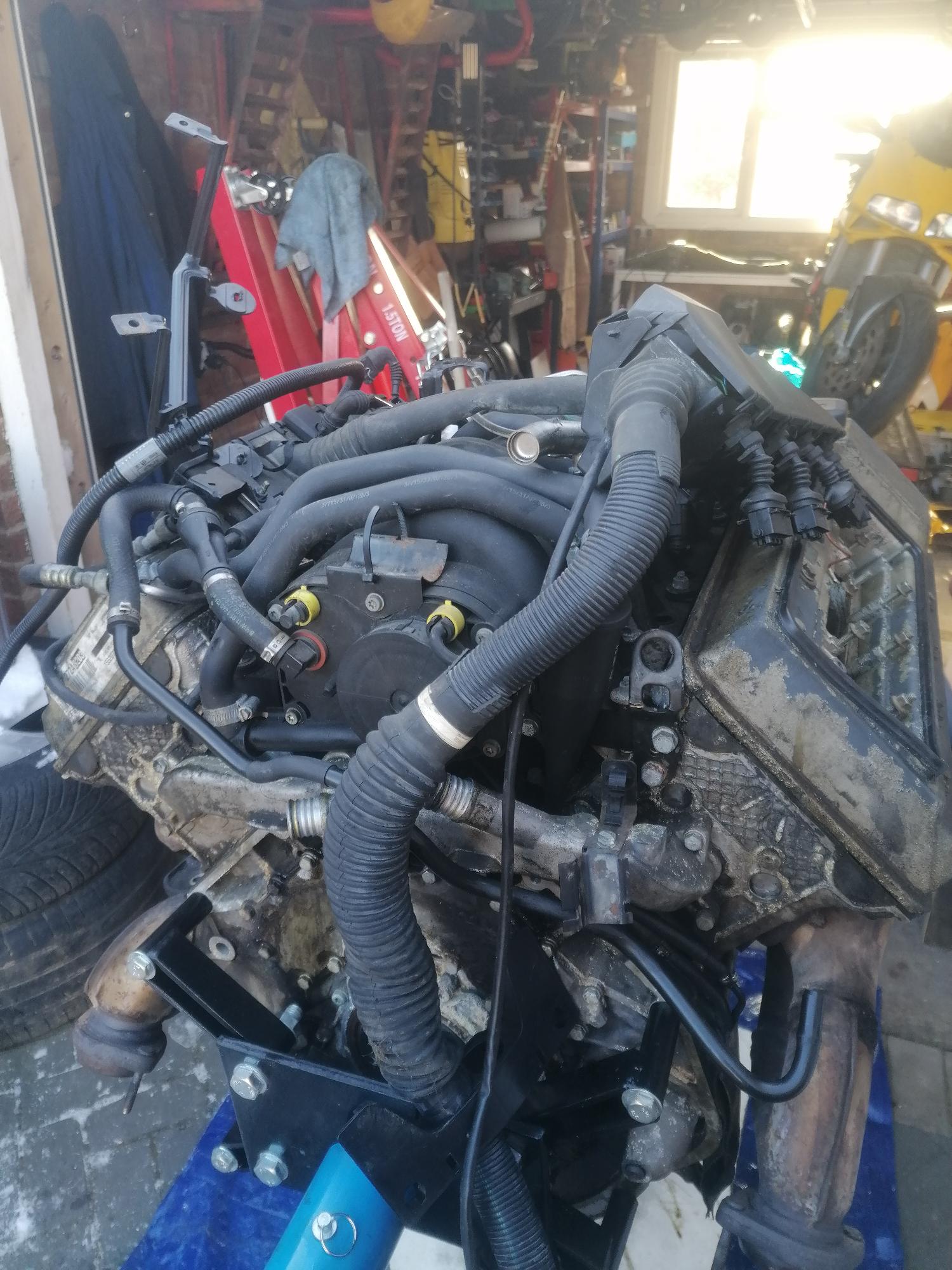 as it was when first put on the stand 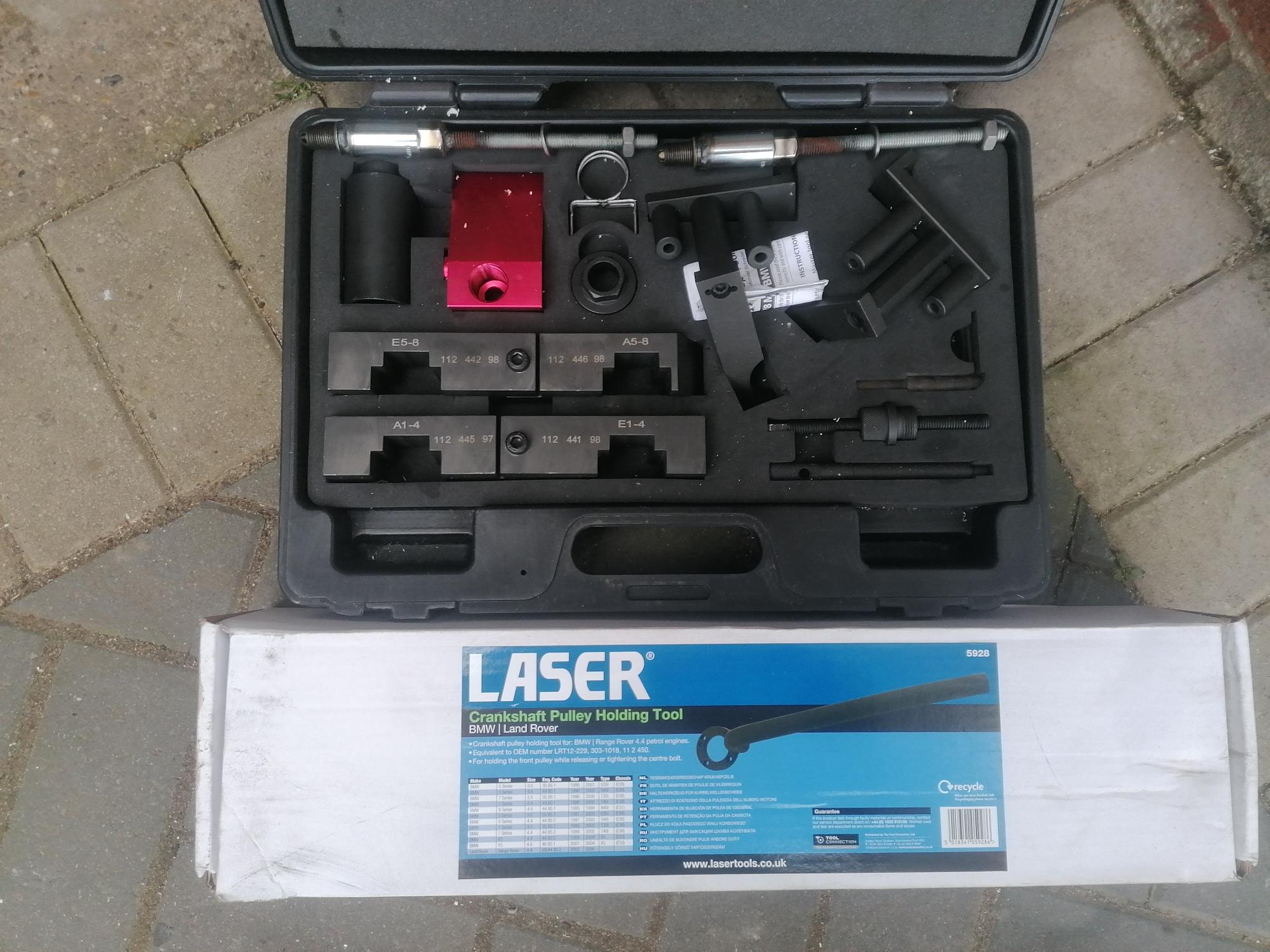 these are the tools that my neighbour lent me, there a seriously well put together piece of kit, he also made a couple of tools that thread into the spark plugs along with some blocks that hold the timing tools solid when fitted as he likes to over engineer things, they've saved me a chunk of financial outlay on the job which is good giving what follows. 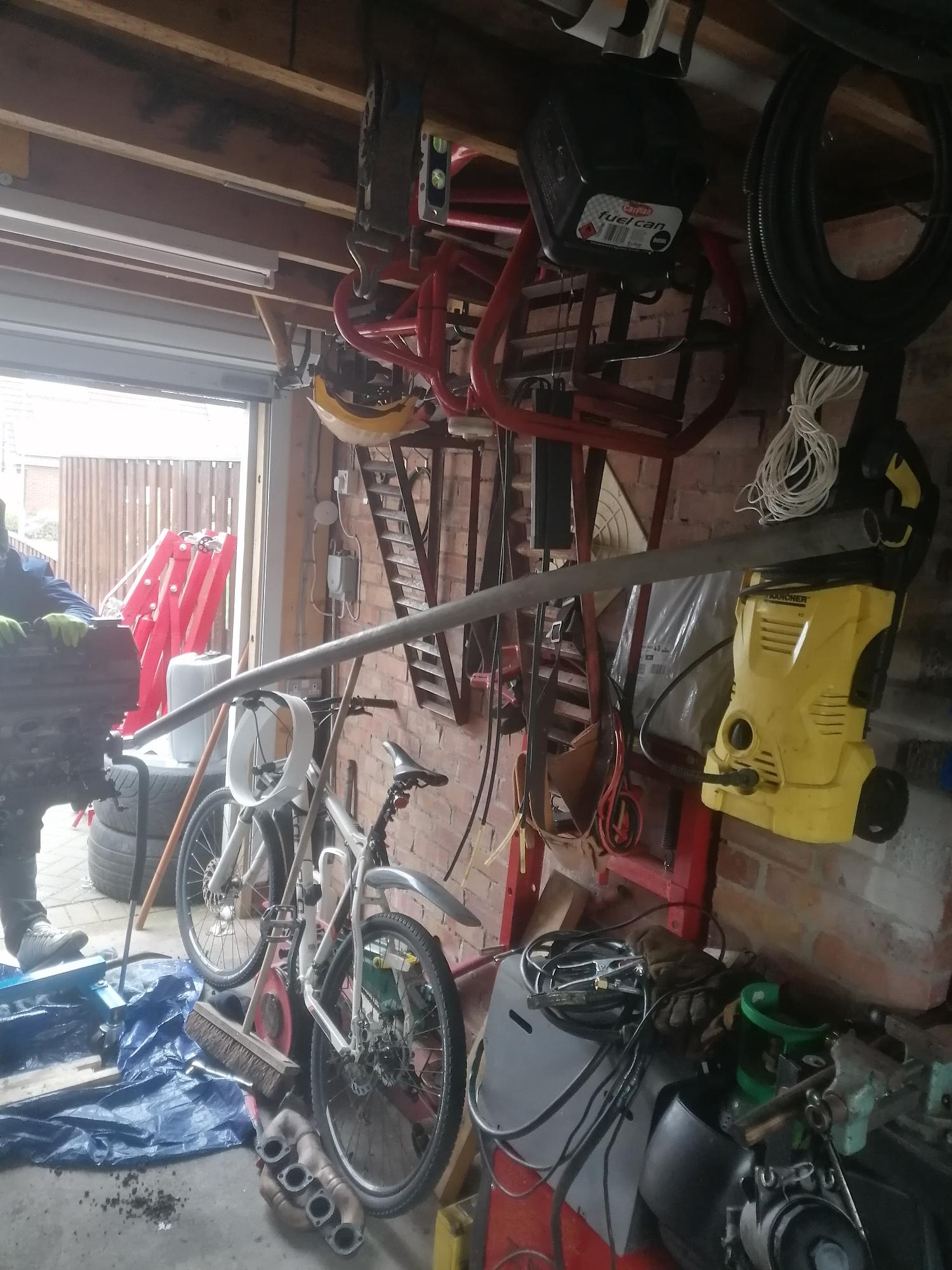 crank pully bolt was a bit tight, broke both my 1/2 inch breaker bars, fortunately halfords replaced them no questions asked, I ended up buying a 3/4" drive breaker bar and a 3/4 socket set to go with it and it eventually came loose. 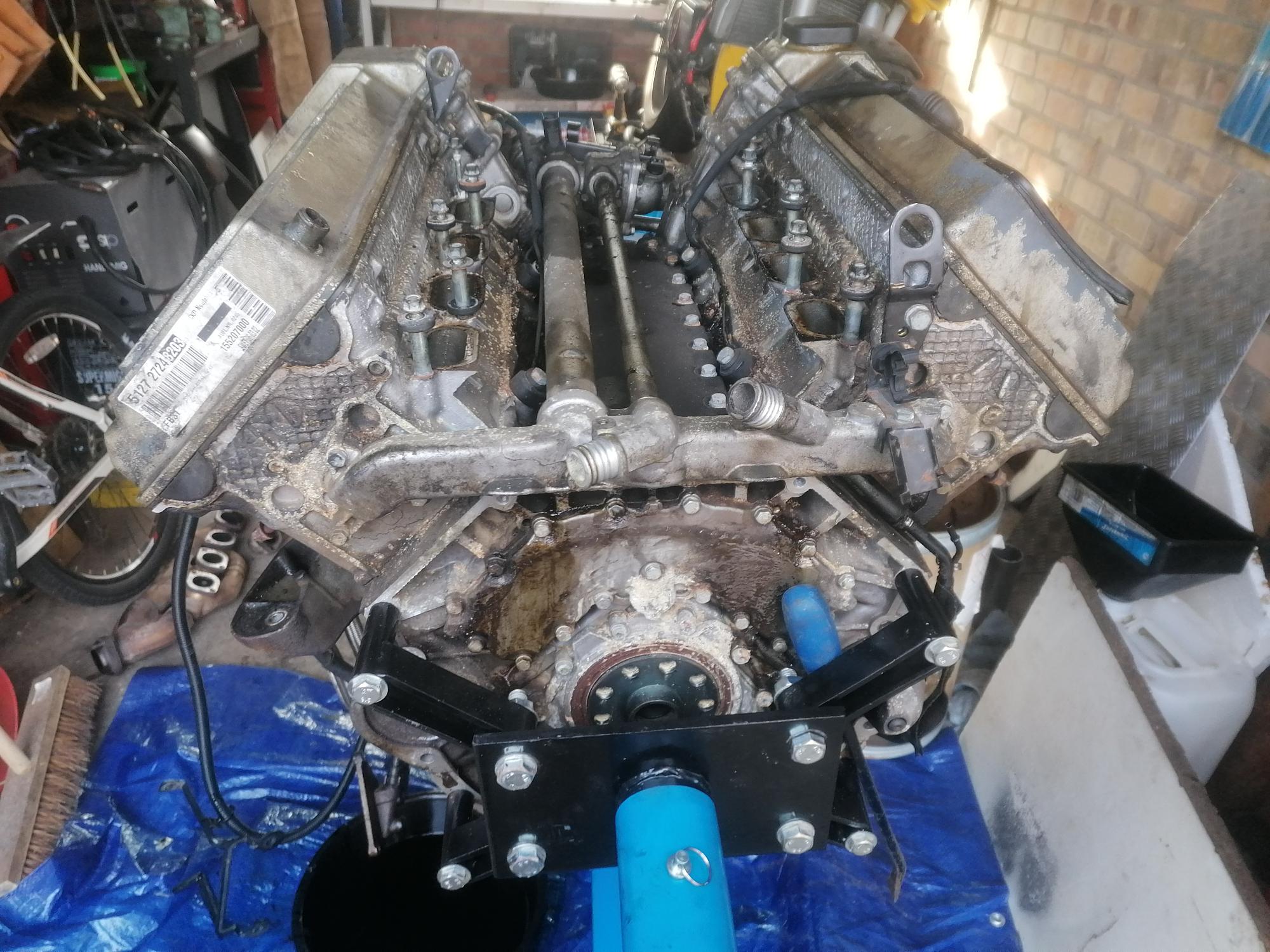 few of the ancilleries removed, this engine has been apart before, most of the gaskets are victor reinz which im fairly sure weren't the oe supplier, the timing chain guides were all in one piece but broke up the minute I tried to remove them so they were definitely ready to replace. 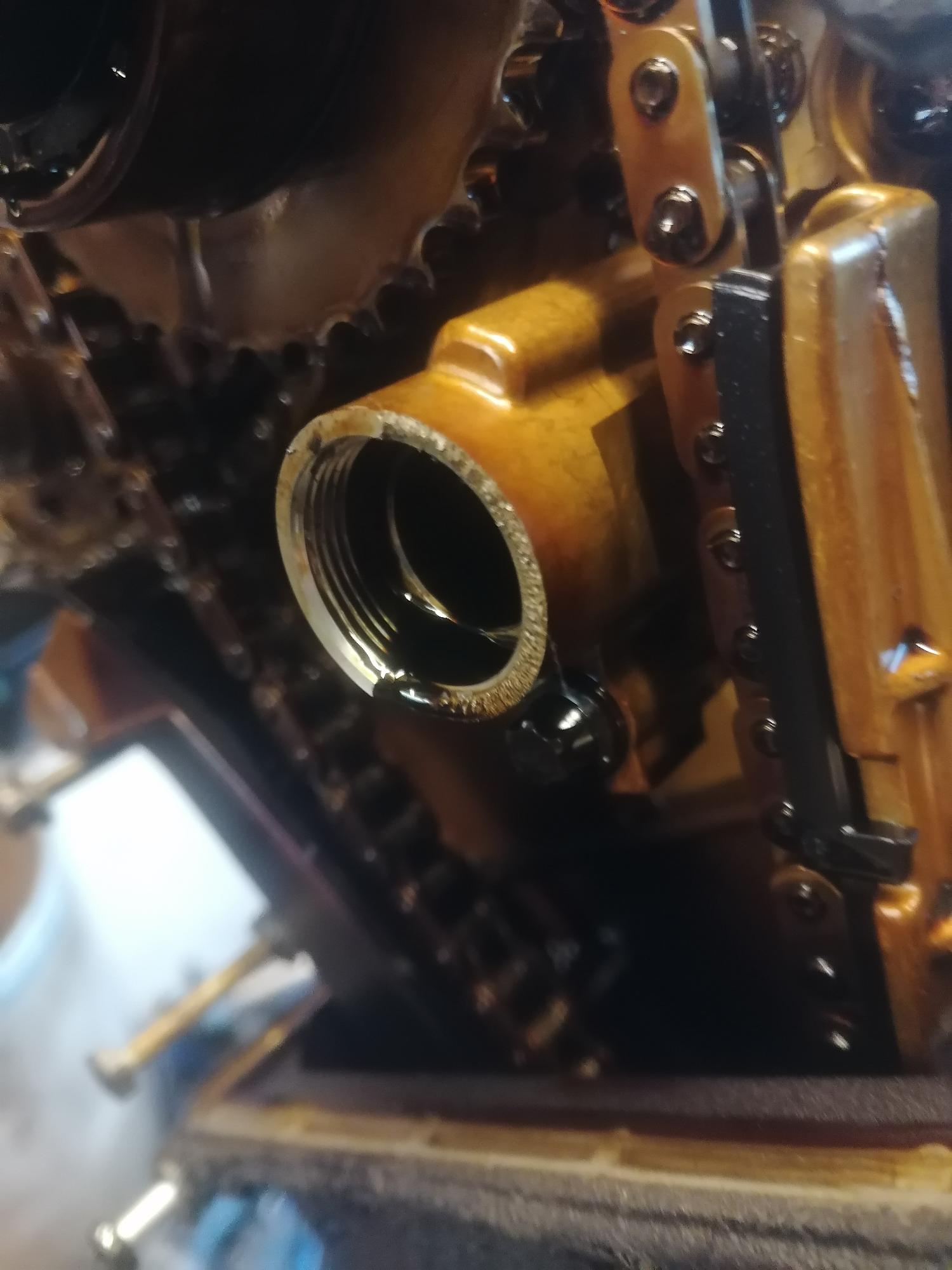 strangely part of the vanos solenoid housing broke away whilst I was removing it too, not ideal. 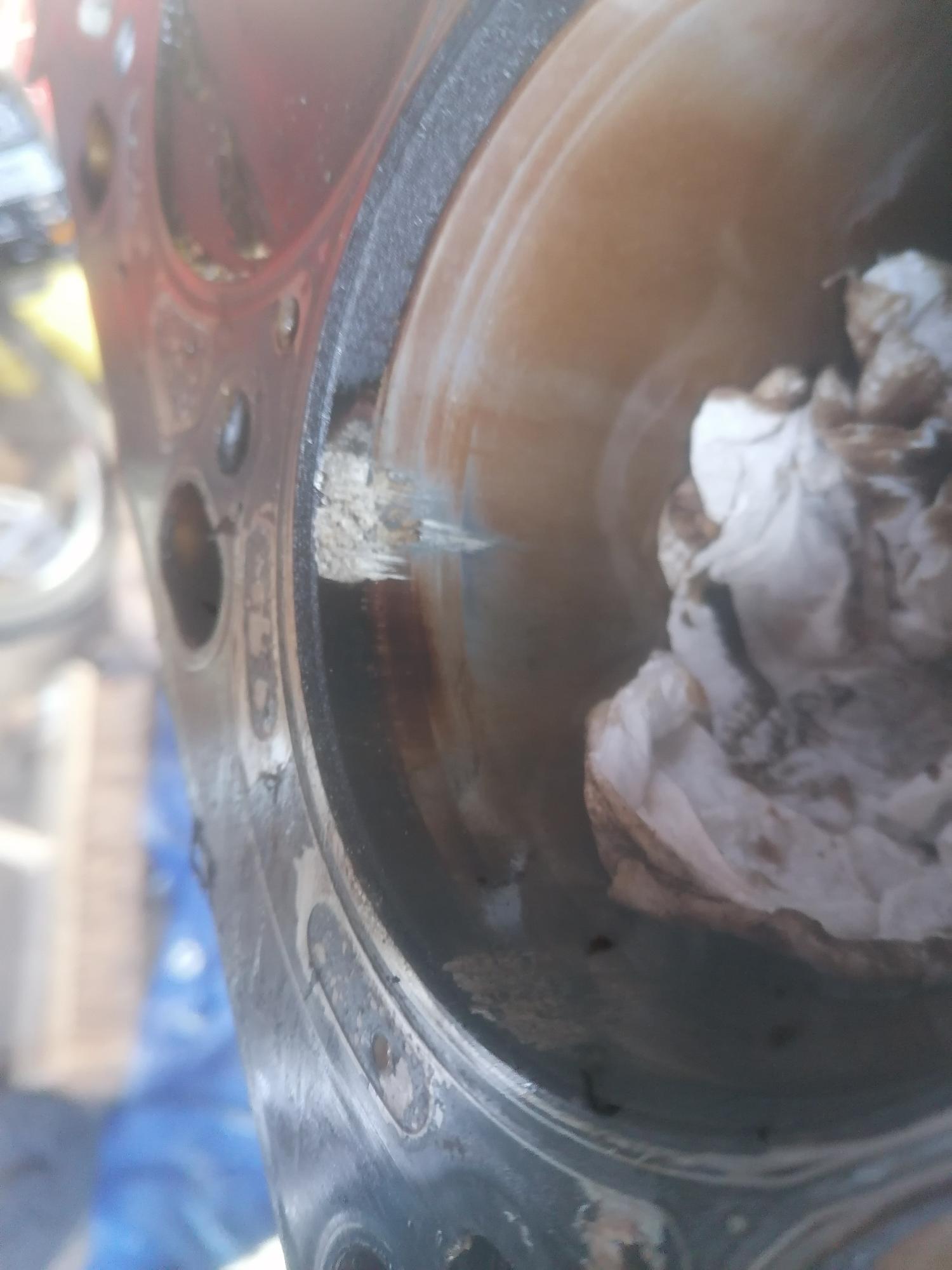 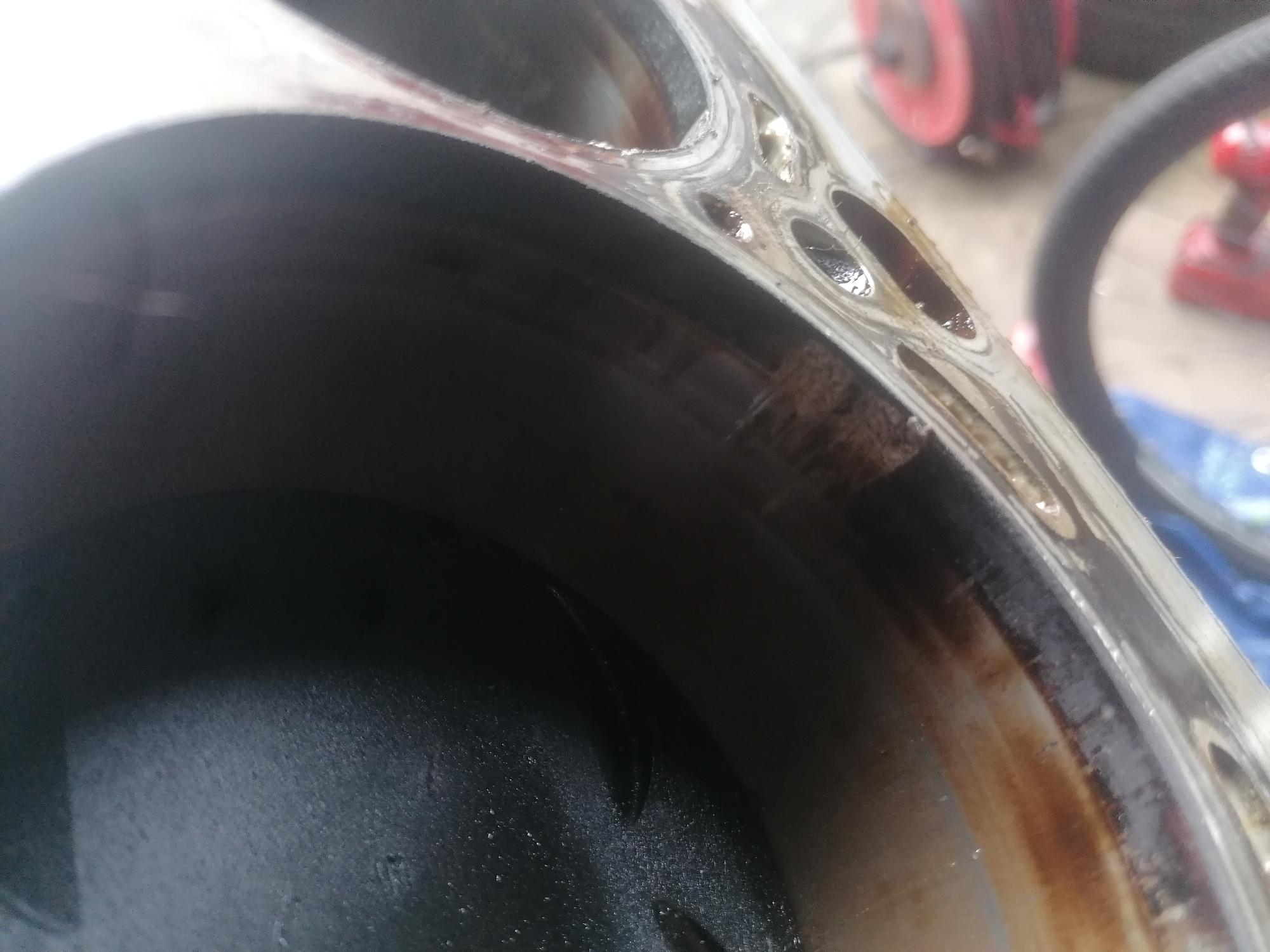 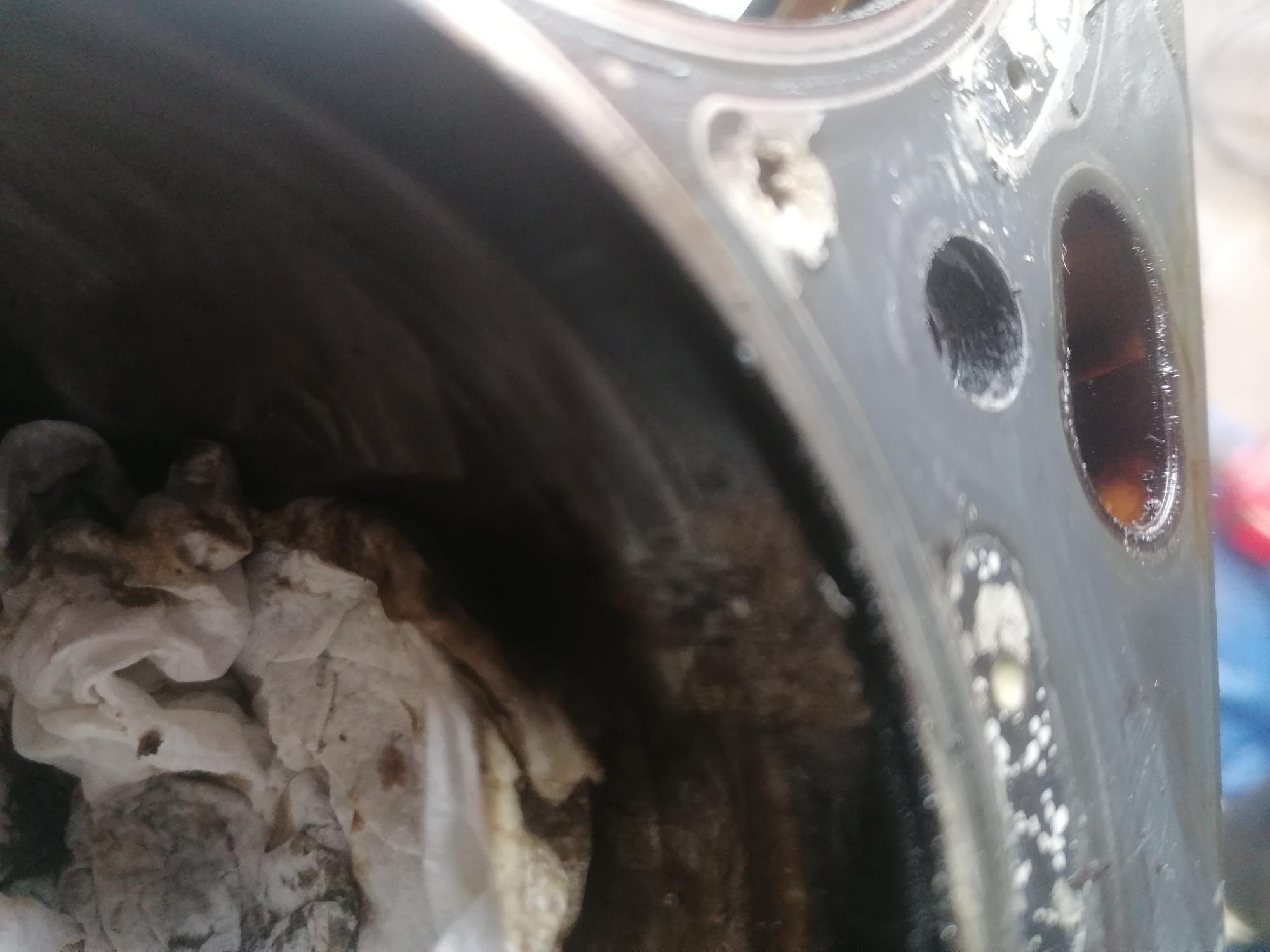 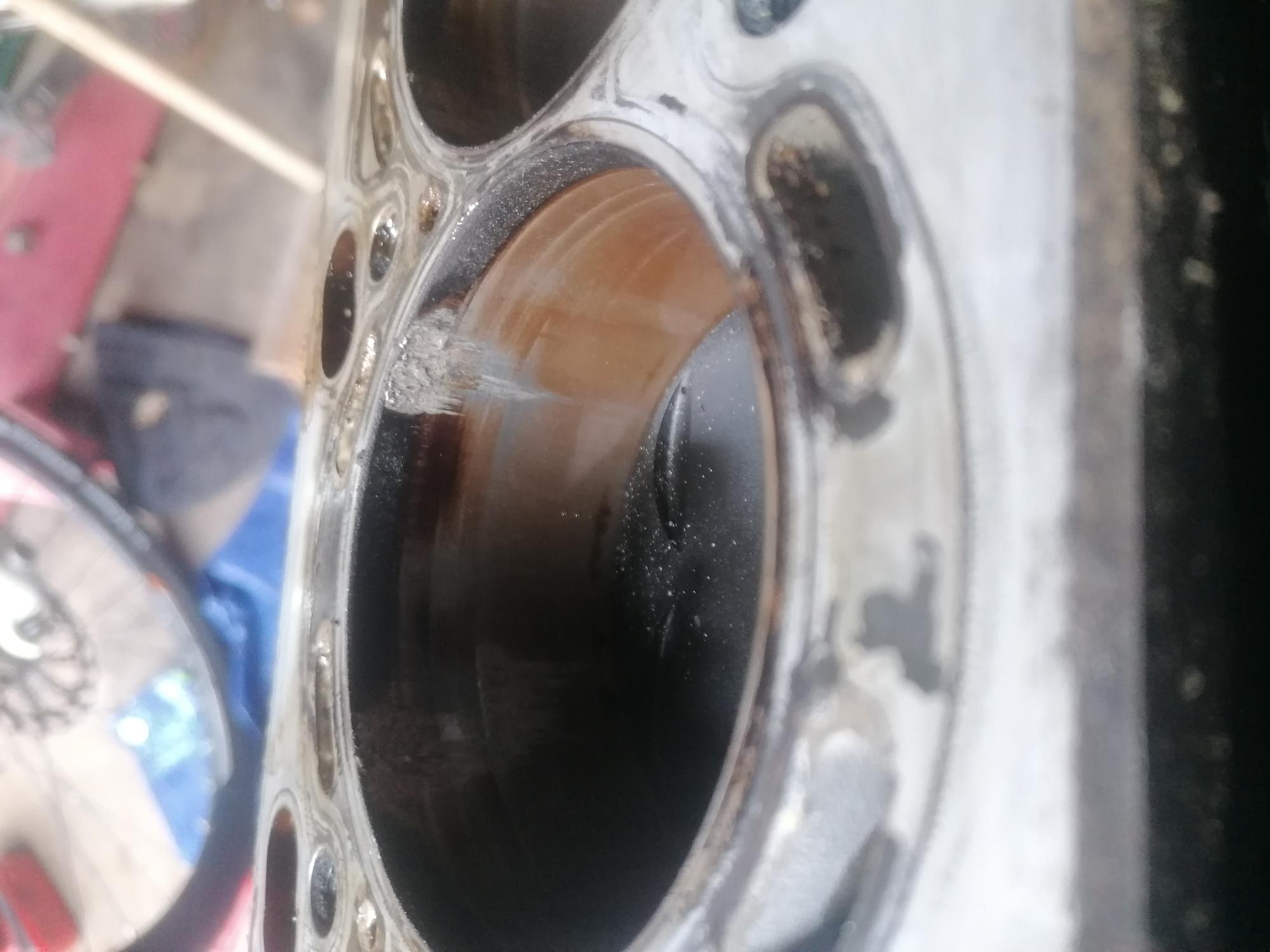 this afternoon I got both heads off and the above shows heavy damage to both cylinders 6 & 7 (centre cylinders right hand bank looking from crank end) so that block will be getting made into a table. There's no obvious sign of anything having been through the cylinders and the headgaskets look in one piece, I dont think it's piston ring damage either as the pistons move through the bores smoothly, whatever the cause there's not much point dwelling on it.

Now to source another block, are all m62 blocks the same? there's a m62 non vanos e39 535i engine currently on ebay that has been stripped and looks in good condition for reasonable money but will it be the same as my 2002 4.4i block?

There are also a couple of cheap complete engines on there but the risk is the cylinders could be just as dead when I get them stripped, the same really goes for any second hand engine.

How strange. Corrosion or heat damage leading to pitting? This age engine wasn’t one of the ‘Nicosil’ problem period lumps was it? I assume getting it bored and honed won’t fix it, it would need fully boring and liners inserting?

RealOEM will tell you if the part numbers are common to multiple cars & years.

Heat is probably the most likely cause making the piston seize at the top of the throw but it's all academic really.

Make sure you buy a new crank pulley bolt. If you use the old one don’t try and torque it to factory spec. Shame about the bore. Good luck with it and keep the updates coming.
Top

Phew... I dodged a bullet there. I was a knats cock away from buying that car.
Top

Not a massive dodge really, it was described as needing a new engine and it's turned out it does, I've sourced what should be a decent block that's getting delivered Monday along with a full headset and full timing chain kit and the coolant hoses I needed so currently I'm only a power steering hose short of having all the required parts and a few seals and bolts that ill get from my local bmw dealer
Top

Are you local to where you bought the car?
What about the engine bay - is that going to receive a full clean up while the engine is out? Keep the info and photos coming. Interesting.
Top

Engines bays already been treated to a good scrub with paraffin and a jet wash its much more acceptable now, I'll get pictures at some point.

I've managed to find an engine that should have a decent block, it's from a car being broken as the owner thought it had a snapped chain, it's actually suffered chain guide failure so the block should be in good condition, he's agreed to refund me if it isn't. I'll be swapping my oil pump setup over given his will have plastic swarf through it, he's also got the hoses and bits and bobs I need in good condition, the whole lots costing me £400 delivered which I'm happy with, I'll make most of that back selling the heads and ancilleries once they been tidied up.

Hopefully should be here tomorrow so this week should see some meaningful progress.
Top

So, 'new' engine arrived tuesday after a bit of a delay including the seller having to borrow my engine crane so he could remove it

'Themoog2' here's a picture of the pressure washed engine bay for you, 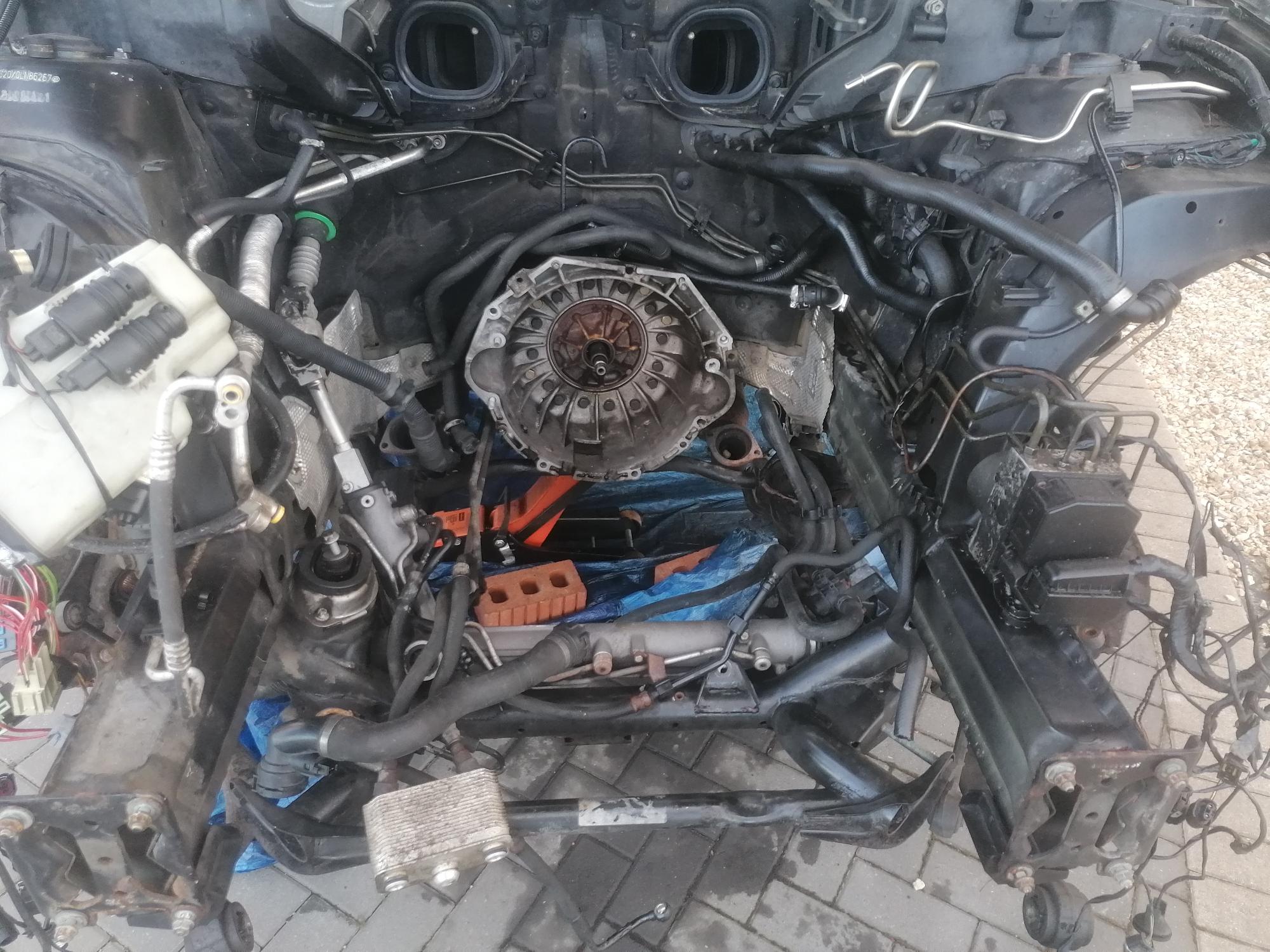 On tuesday I very quickly chucked it on my engine stand and pulled the heads off to inspect the bores, all 8 are in very good condition so we have a winner

Today I proceeded to strip off all the ancilleries to leave me with a bare block, when removing the oil I found a lovely trail of goldy bits in it, this may be big end bearing material or may be bits of bottom end worn off by the failed chain guides, I'll look properly after fully cleaning the block, worst case I'll be removing the crank and fitting new bearings. 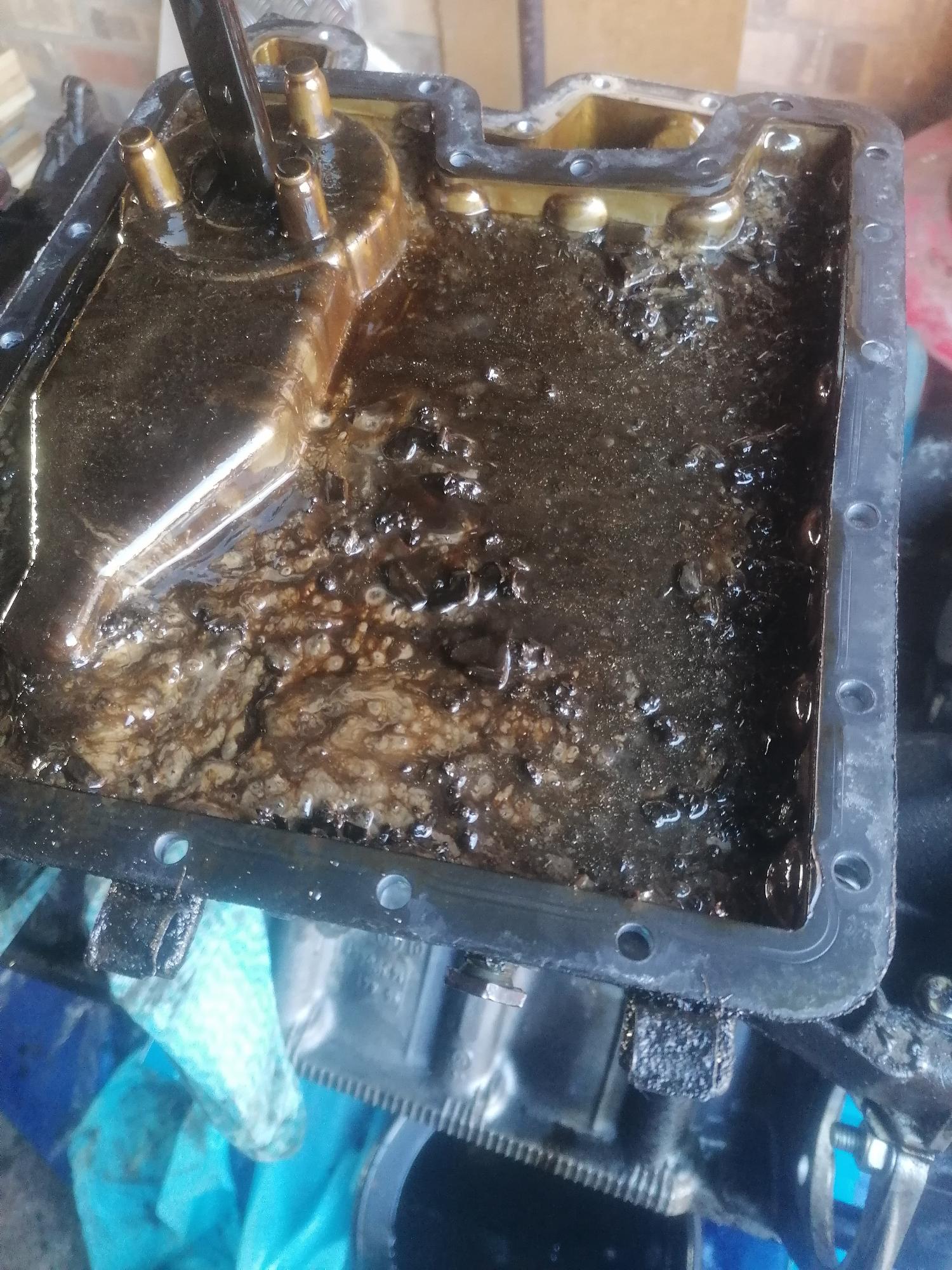 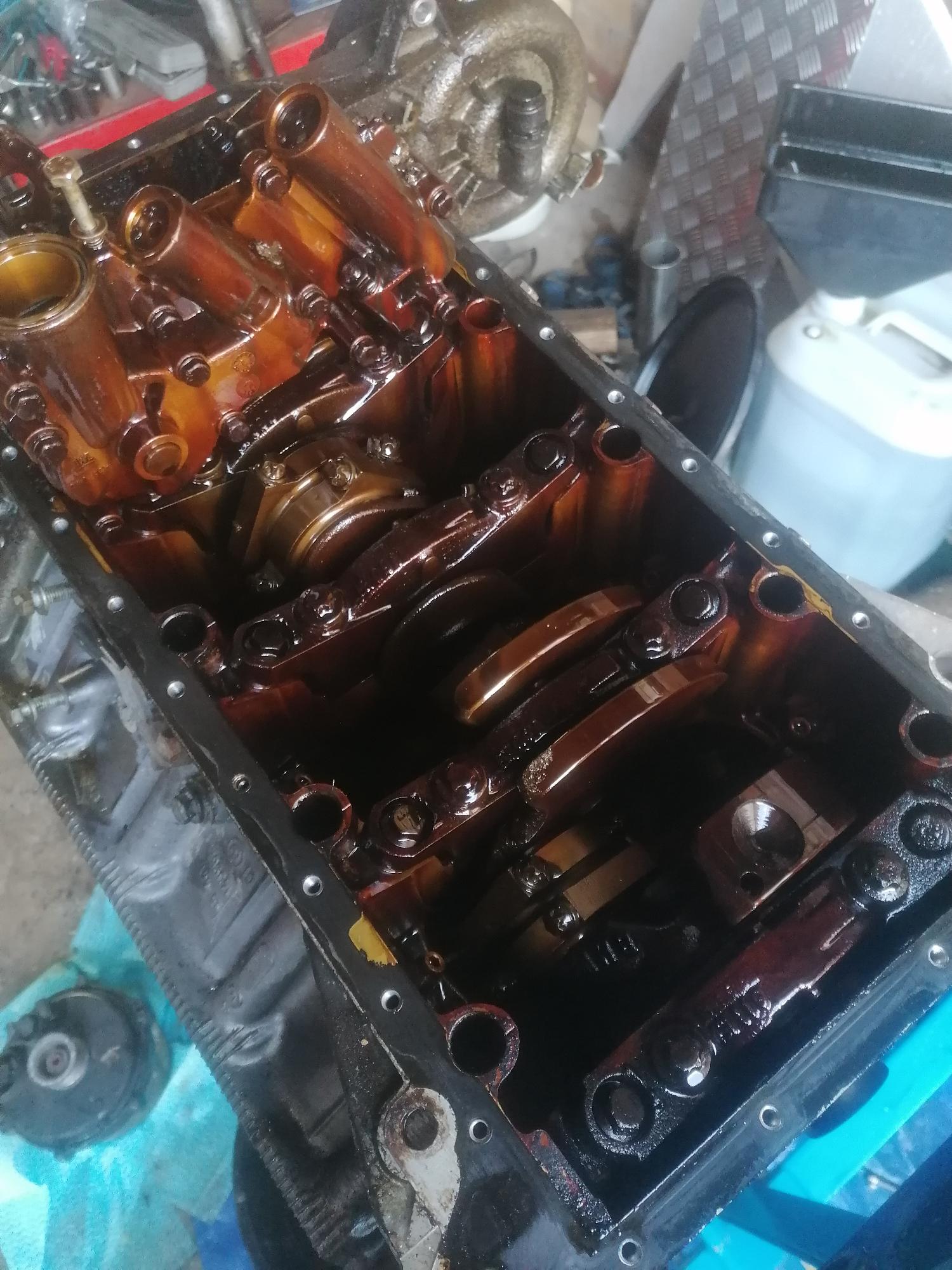 This week my new timing chain kit and full head set arrived both look like quality items, the timing chain kit doesn't include a new oil pump chain so I'll need to source one, probably from bmw.

Has anyone had any success using aftermarket vanos solenoids? I don't like the look of any of the 4 I have so replacements need to be sourced but I know there daft money at bmw. I've ordered the seal repair kit for the actual driven gears they should be here in the next couple of days.

So hopefully over the coming weekend i should get the block into a useable, cleaned state and also strip down and rebuild both cylinder heads or at least make a good dent in the job.

I’ve done two of these and never seen a sump look like that, is there some water/coolant mixed in there. Must have been driven a fair bit with the guides gone which blocked up the oil pick up pipe enough to cause the likely bearing wear. Your making good progress though, that bay looks good, you may even be able to put it all back in and keep your hands clean. Keep the updates and pics coming.
Top

The coolant/oil mix is from while I've been stripping it, it was just oil and guide mush when I removed it, I've not been overly tidy whilst getting it stripped down and all the fluids out so they splashed around all over the tarpaulin everything's on.

I suppose whoevers had it must of driven it round a few garages getting opinions on what was wrong once it started sounding like a bag of spanners, worst case I'll end up using the crank out of the other block with some new bearings in it.
Top

Got a good chunk of cleaning of parts done, 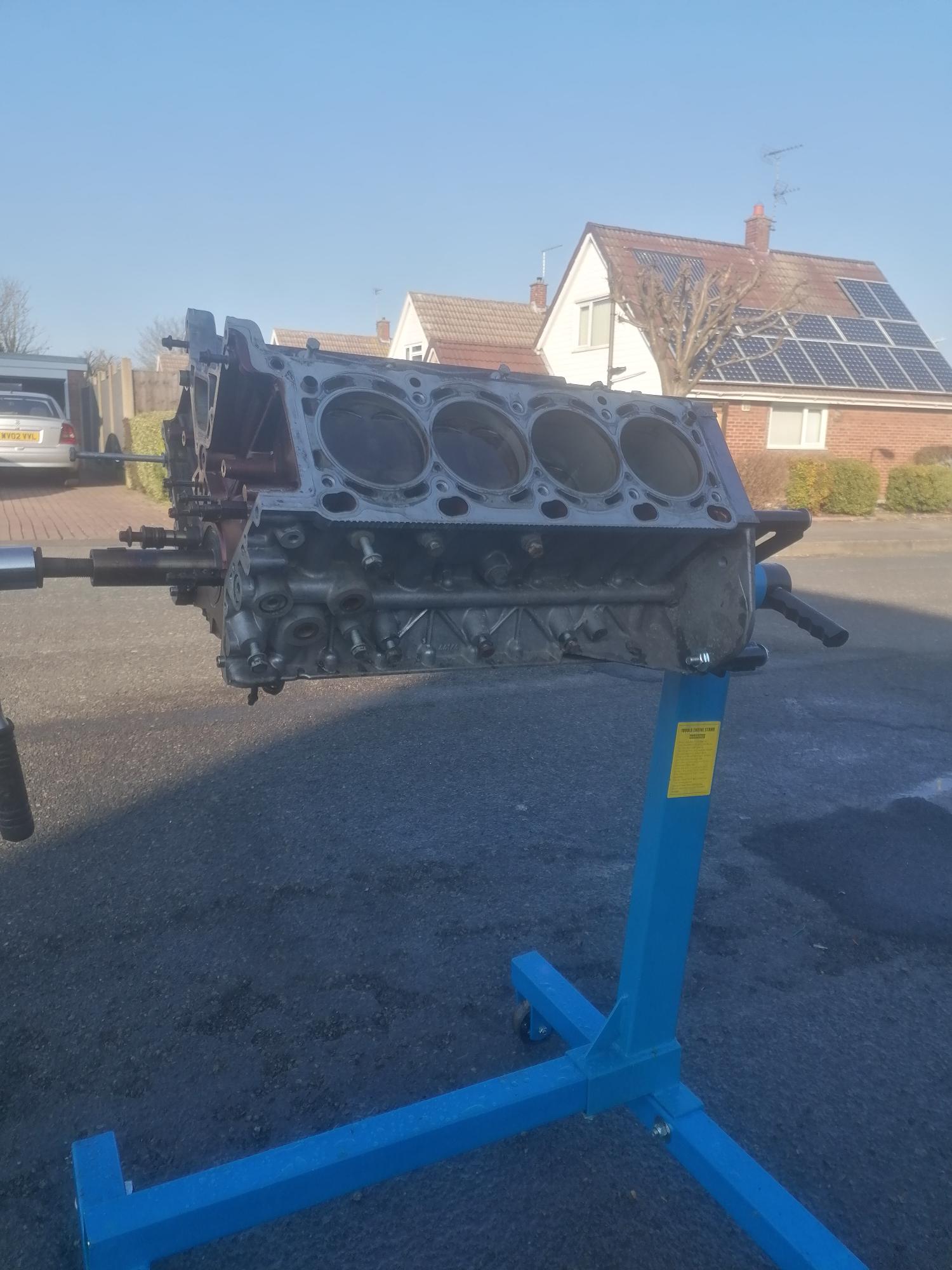 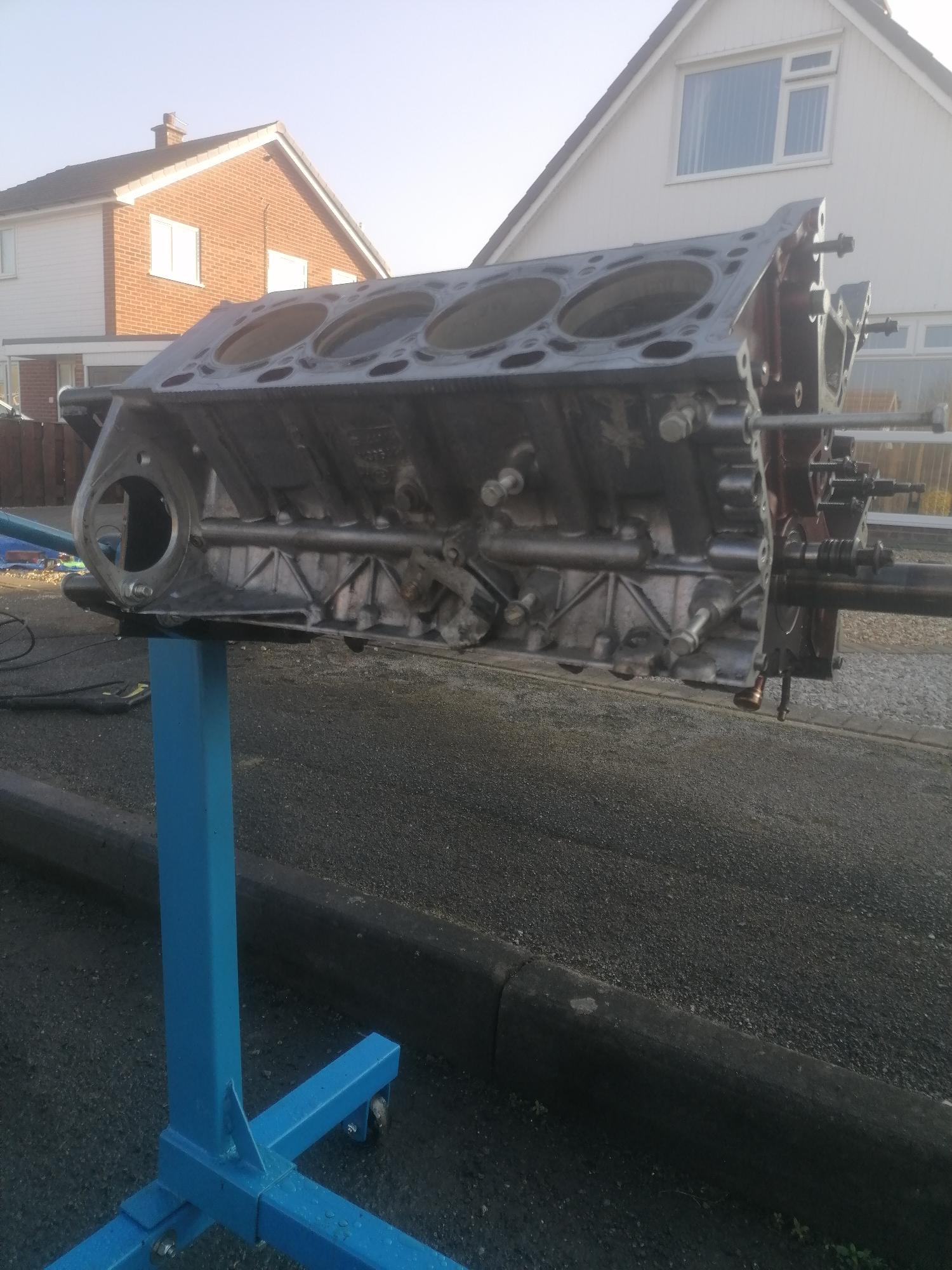 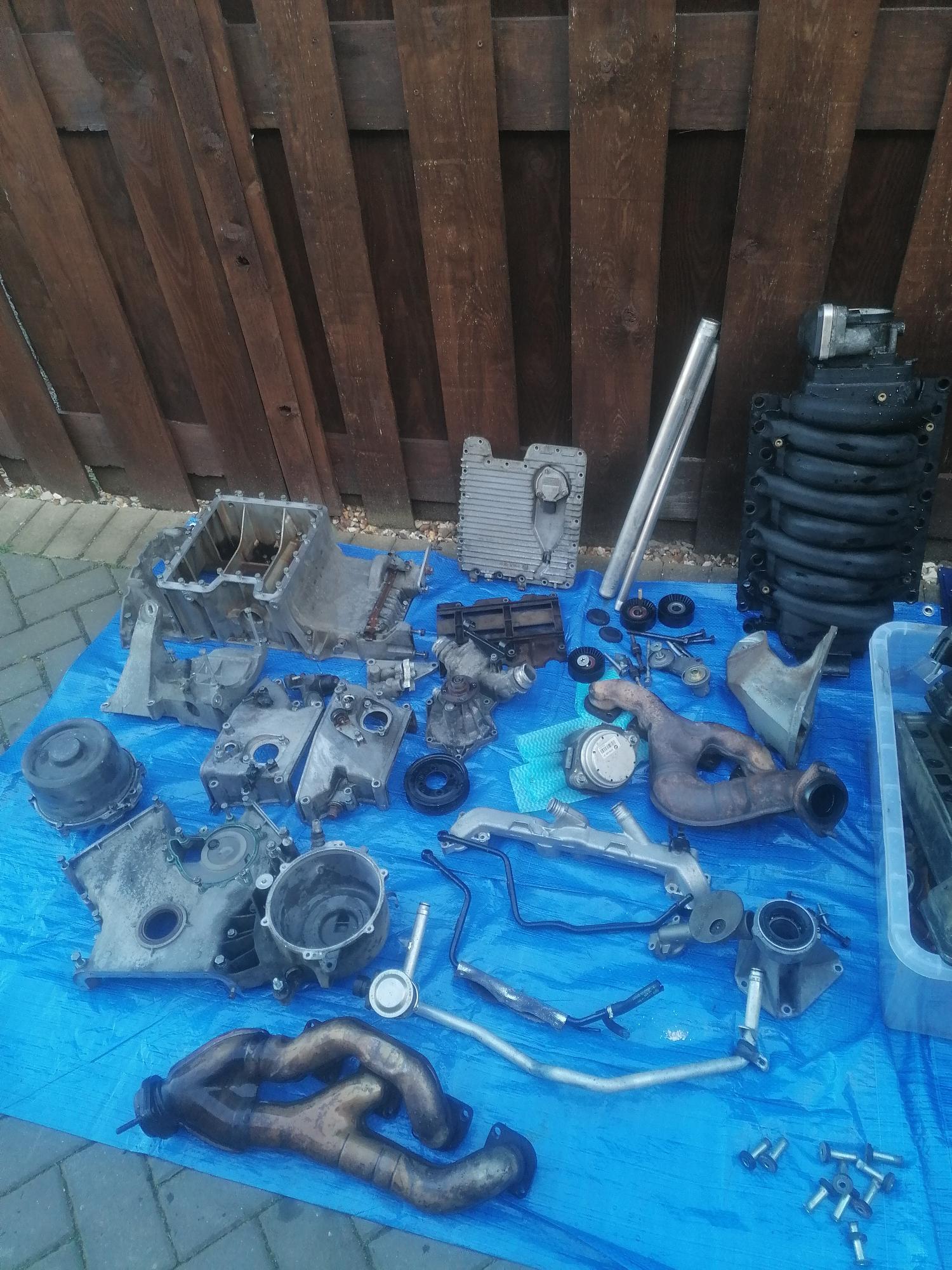 both the block and the parts on the tarpaulin have all been cleaned over with paraffin and then pressure washed, there not sparkling clean and there not going to be, this isn't the type of build where I'm going to wire brush every inch of every part to get them spotless, they just need to be oil and grease free. 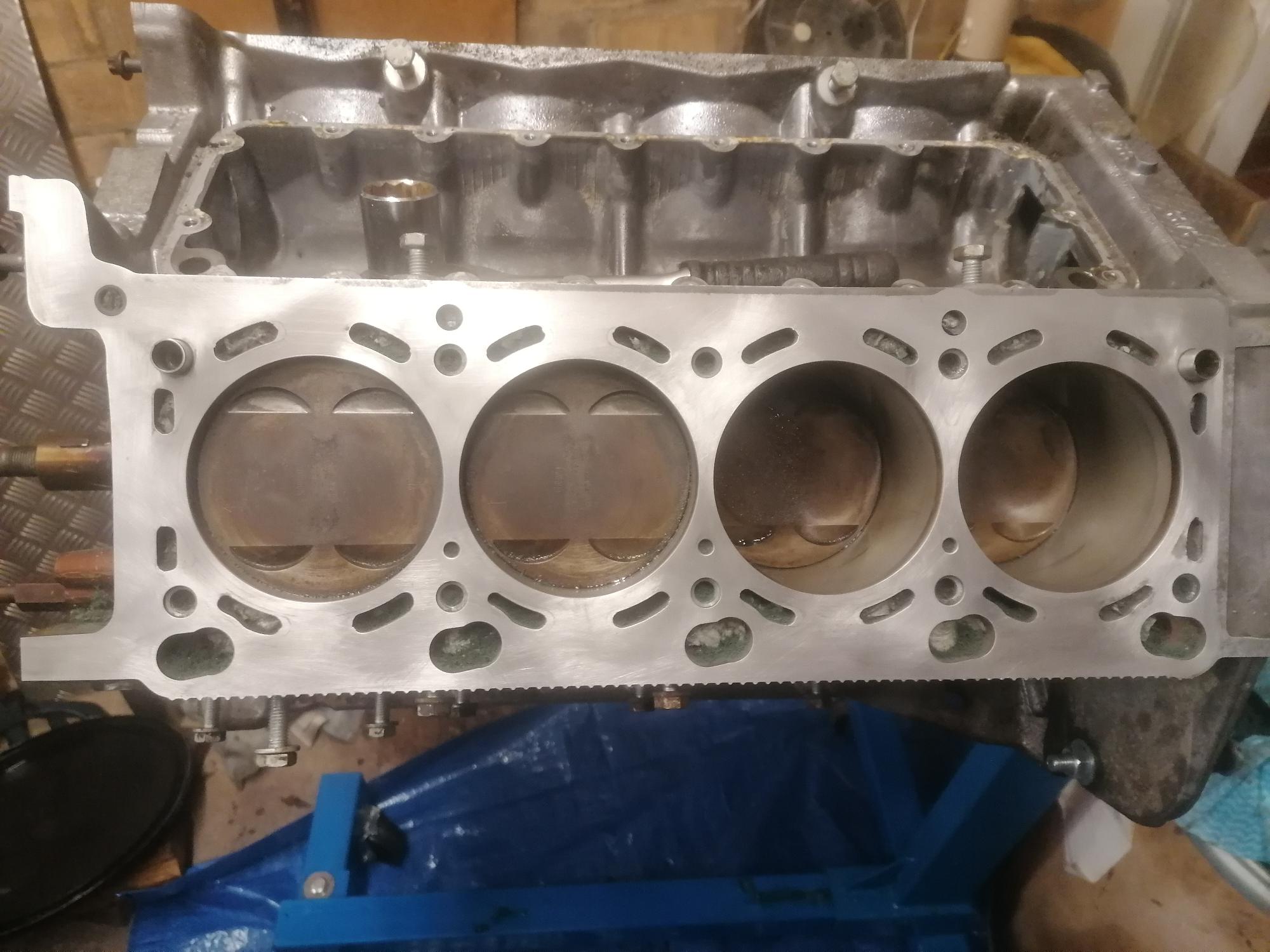 the block faces have cleaned up from all traces of old headgasket really well. 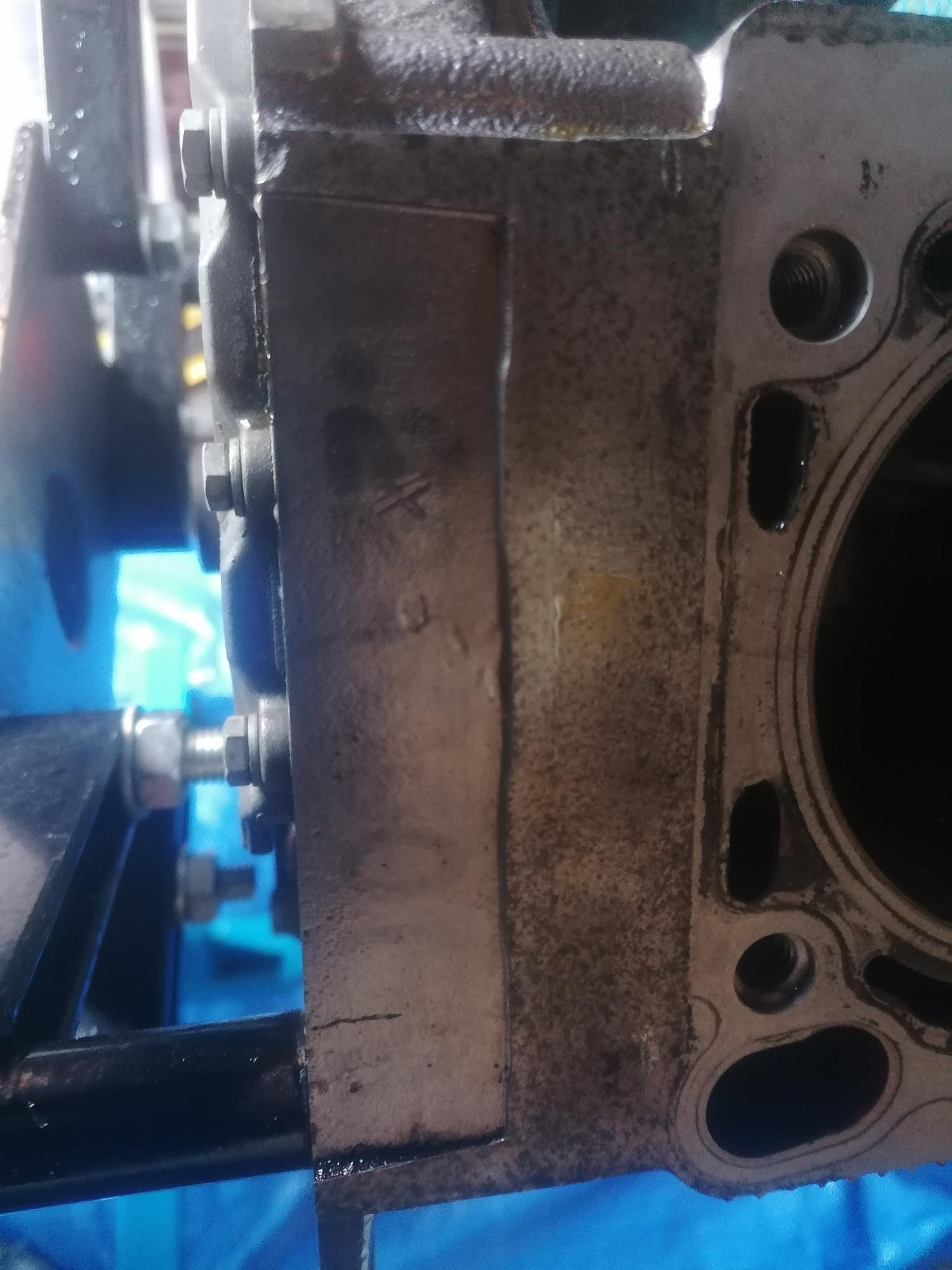 found this marking on the block it says 22/08/01 written in marker pen, I wondered if it's a sign this engine has been apart before as I can't imagine the bmw factory marked blocks with marker pen.

The block will get another pressure wash once I've cleaned up the sump mating face to make sure all remains of scotchbrite and old gasket are removed, then the rebuilding of the block will begin.

after having a good look at the gold shavings I found in the oil and the engine I'm confident they are where the chain has been running directly on the v chain guide as all of the nylon had worn away so I decided not to strip the crank shells for examination. 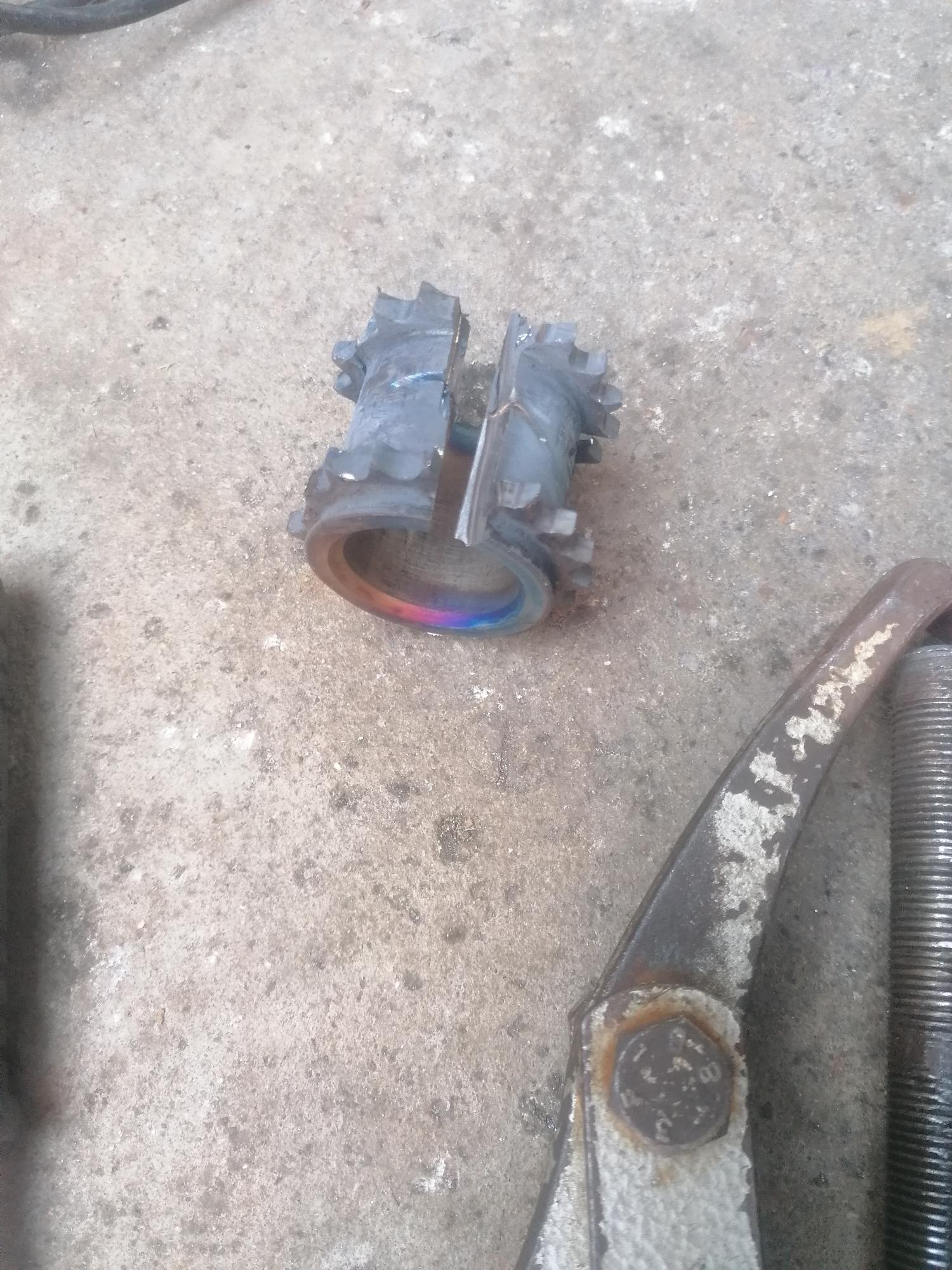 Chain sprocket really didn't want to come off the crank, ended up using copious amounts of heat and cutting it to pieces with my grinder and removing it a bit at a time before it gave in, other than that the rest of it has come apart nicely.

Looking at those numbers, albeit they are feint they look 'printed' to me not hand written. That its a date is obviously possible but maybe its a factory code of some sort?
Top

life got in the way of this last week, I've a 4 day run at this now so hoping to get to the engine being ready to refit by the weekend. 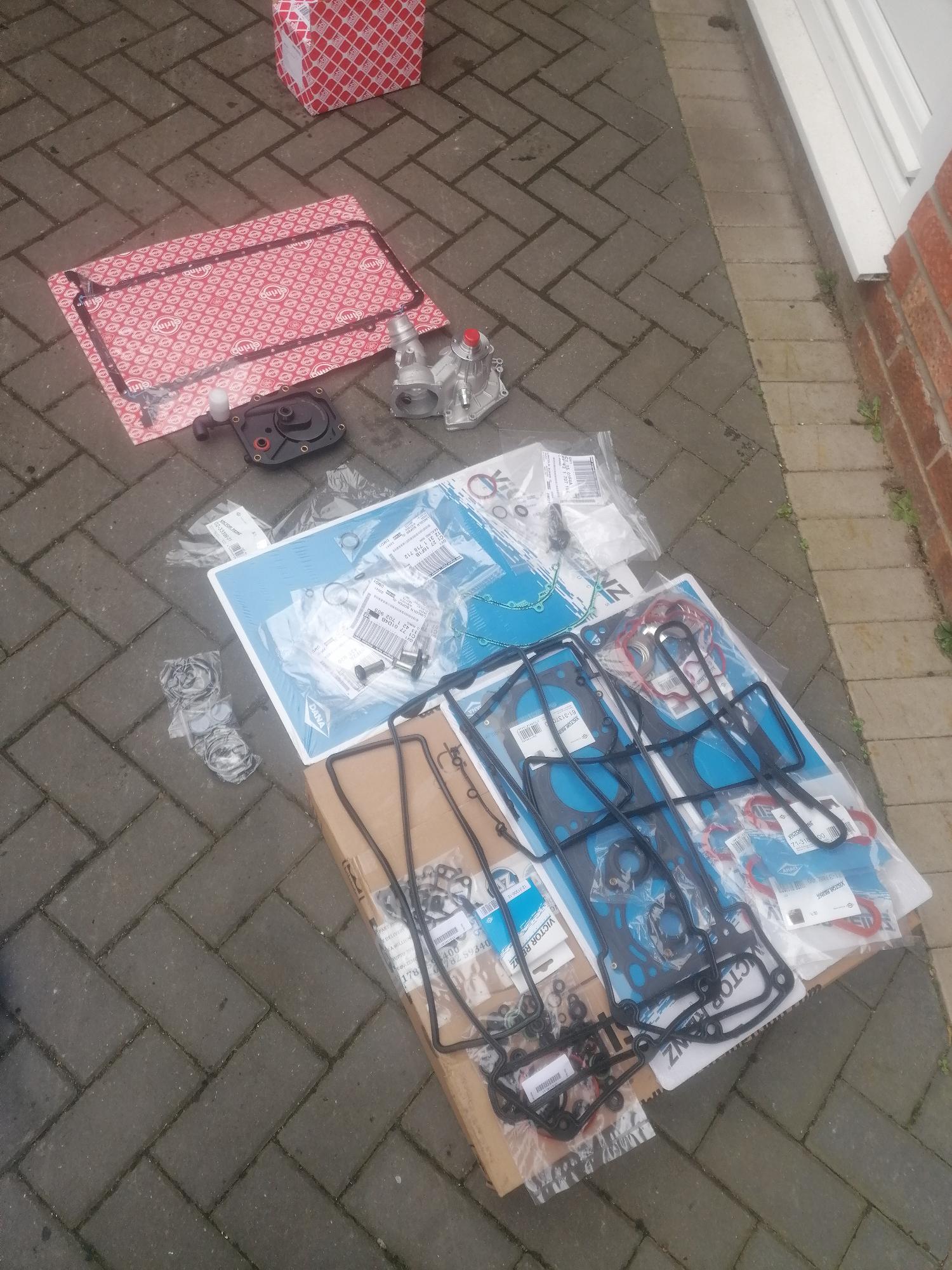 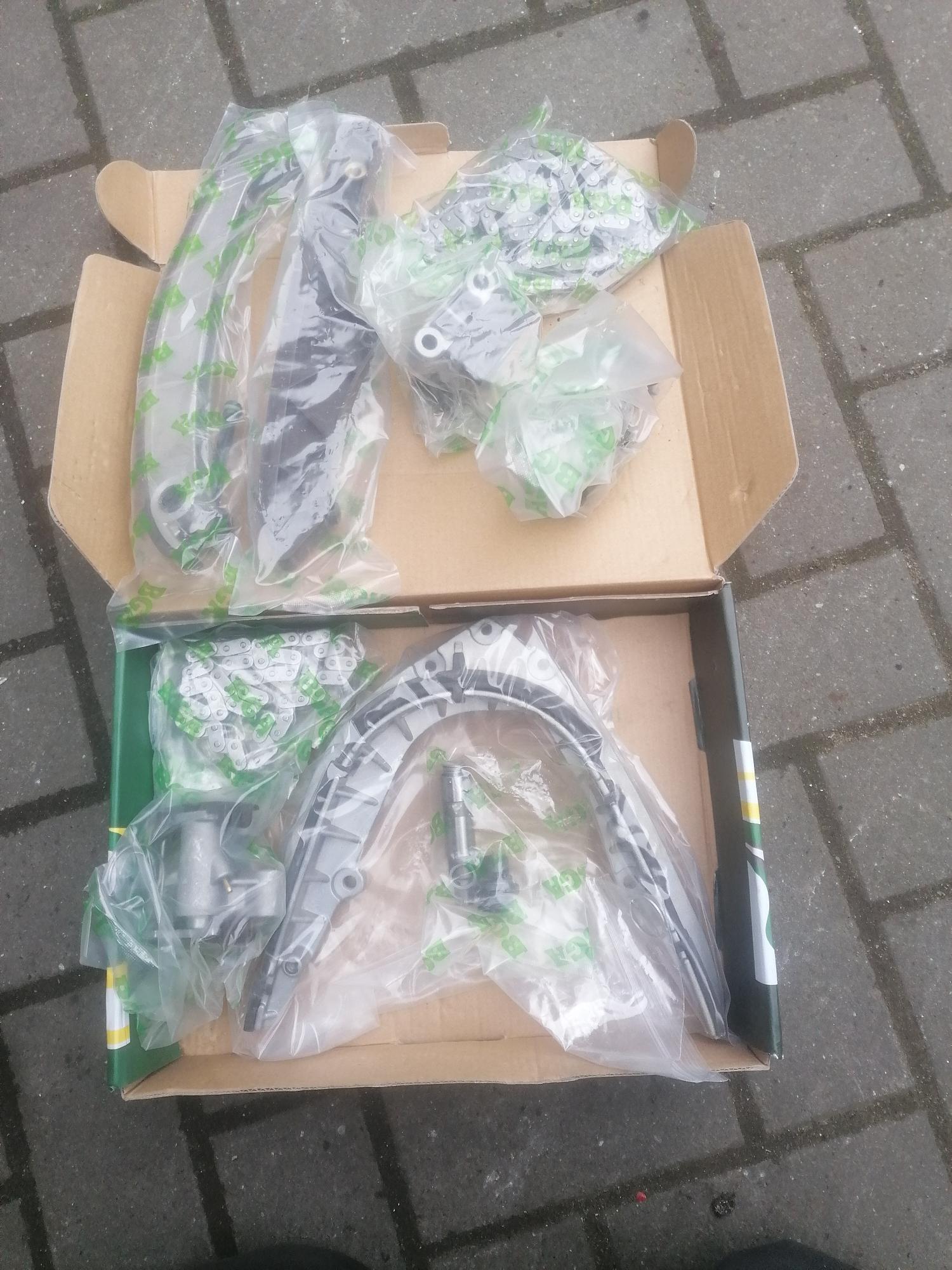 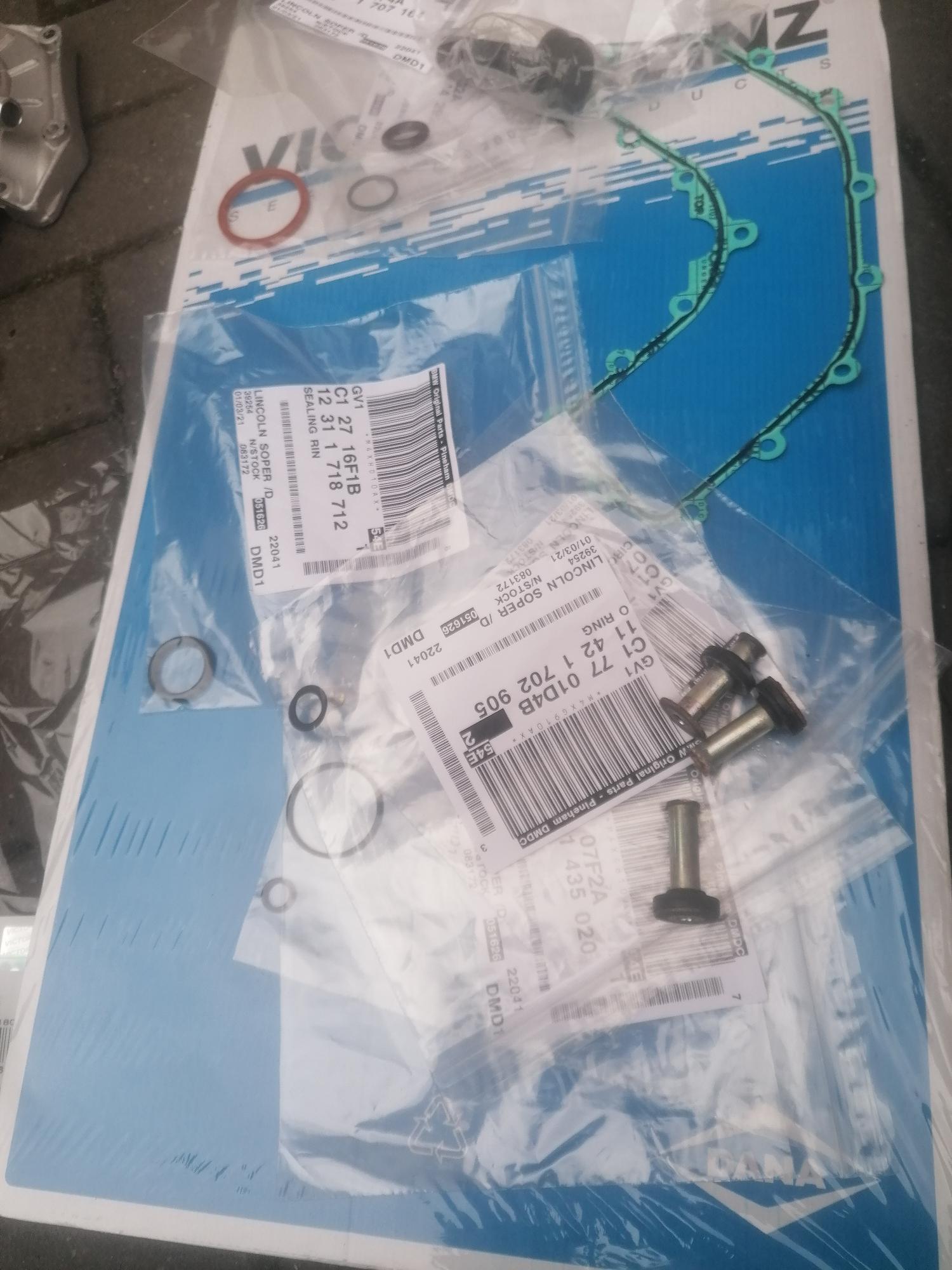 that's a few pictures, just in case you were wondering how many parts it takes to do this job, first pic shows full headset for both heads, new water pump as my original one has some bearing play and the one off the other engine is heavily corroded, new pcv unit and upper sump gasket.

third shows the new crank bolt and some o rings and seals these all came from soper bmw in lincoln, it's always worth checking prices with your local dealer, those bits shown were just over £40 if I'd bought them all online they'd have been nearer £80, the green coolant end plate gasket was just under £5 from bmw online it's nearer £15 it's amazing that people are buying parts from the dealer then selling them on fo substantial markups. There's a whole host of other bits I'm waiting on too that aren't pictured such as both crank seals, gearbox service kit and oil, engine service kit, vanos gear seals and other bits I've no soubt forgotton. 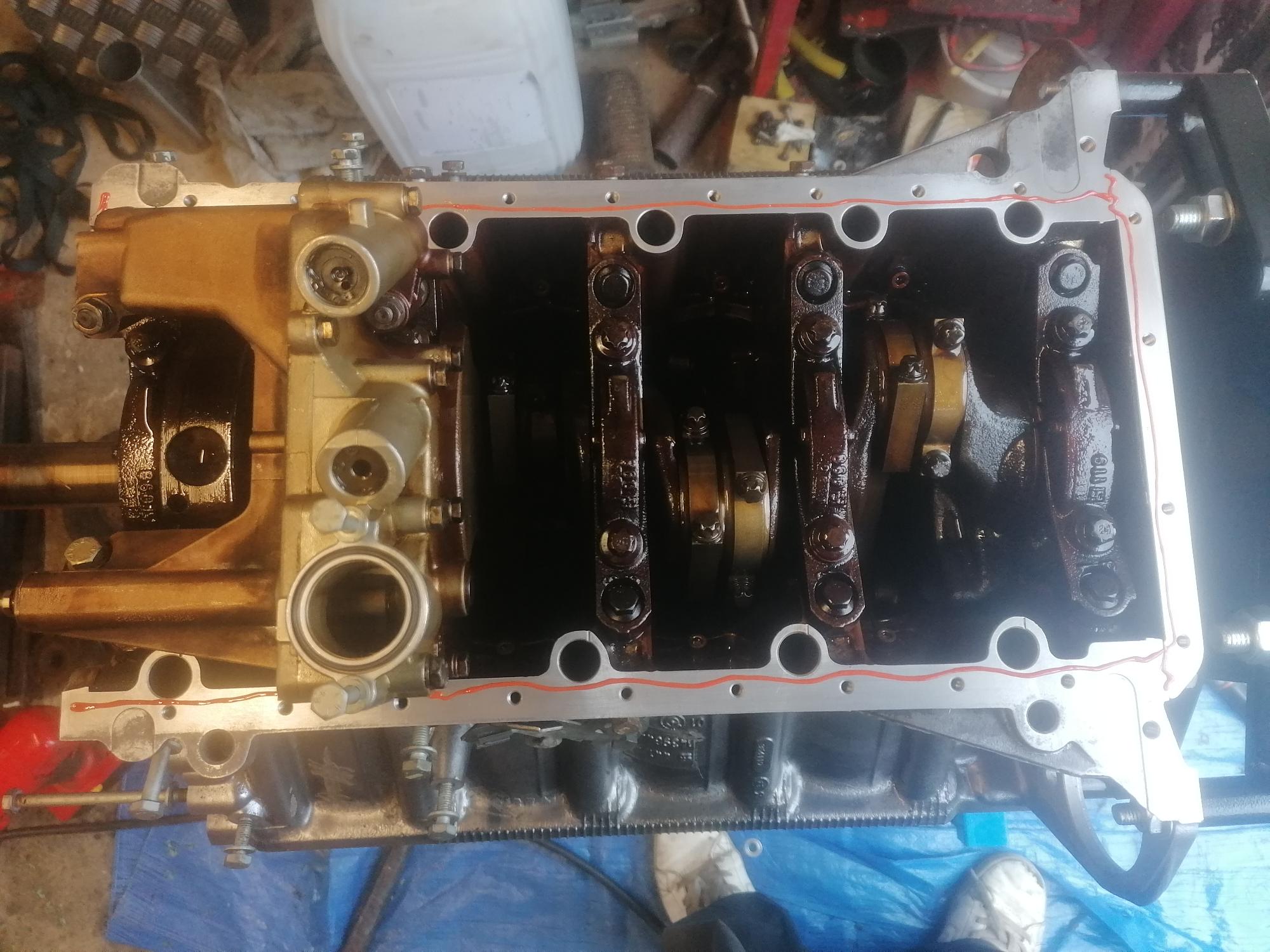 that's the bottom end with the oil pump from the original engine fitted as it's the better of the 2, the orange sealant you can see is loctite 574, I use it on all bottom ends for belt and braces with the gaskets, it's an anaerobic sealant meaning it only goes off in the abscence of air, this is advantageous as it means any excess that may end up inside the engine stays liquid and doesn't block anything, I've never had anything leak when using it and hoepfully this will be the same 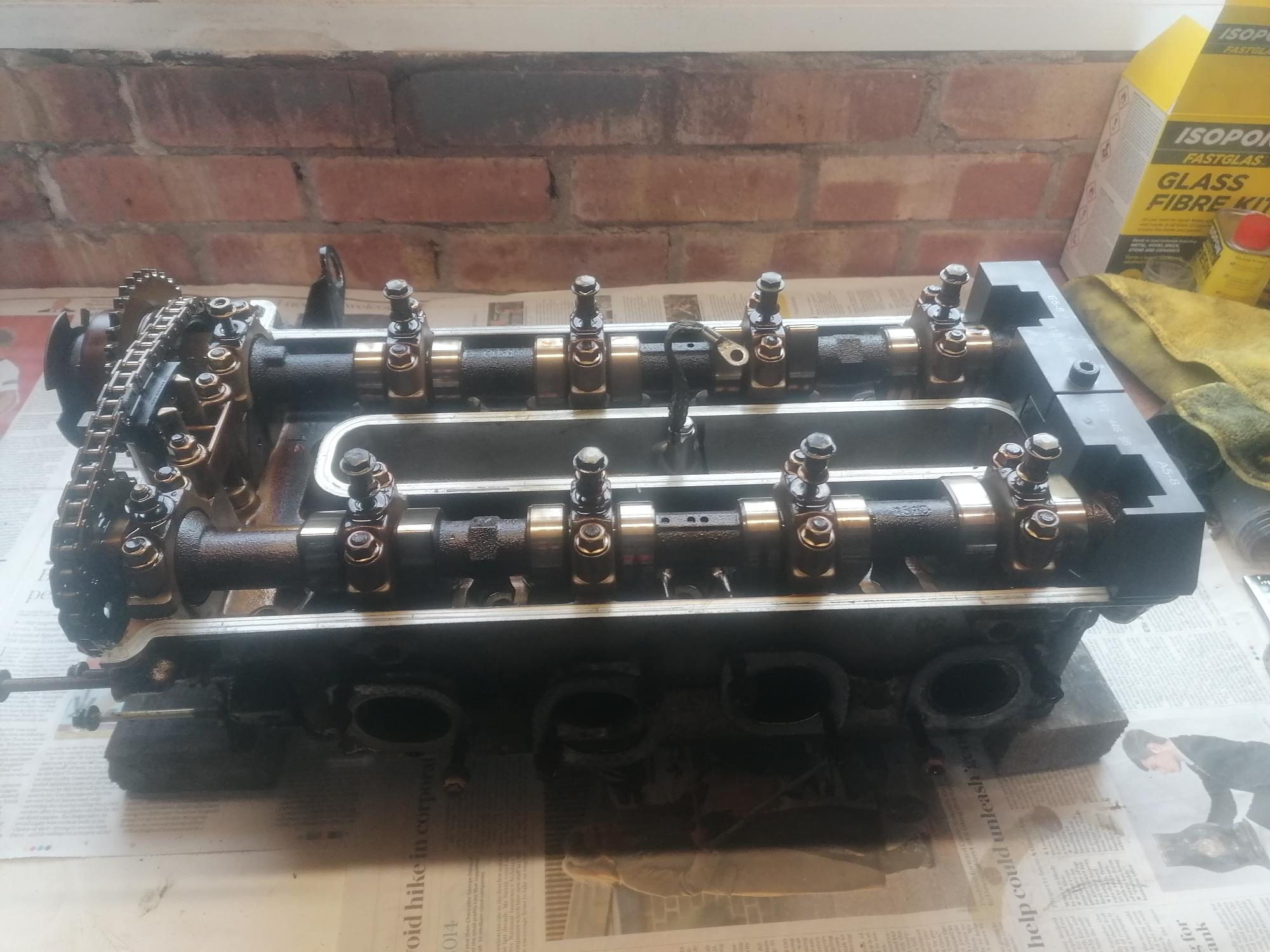 with the sumps refitted the next job was to start stripping the cylinder heads, I decided to do 1 at a time so I can use one for reference as needed.

I haven't taken many pictures of stripping the heads there's plenty of guides online for such things and the m62 heads aren't any different to any other cylinder head. 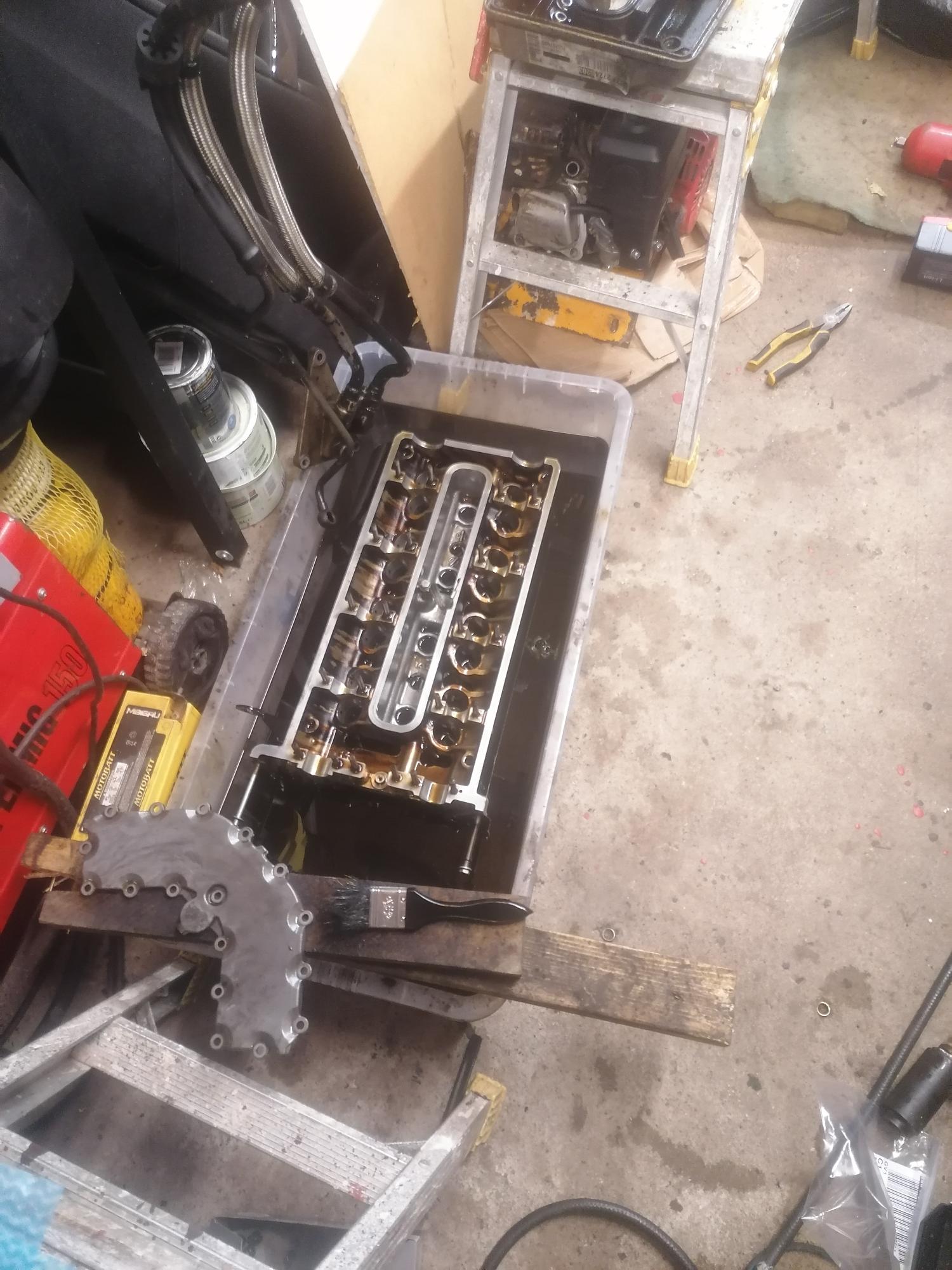 that's the stripped head and cams in my plastic cleaning tank which is filled with kerosene it's the best cheap diy method I've found for cleaning metal parts. 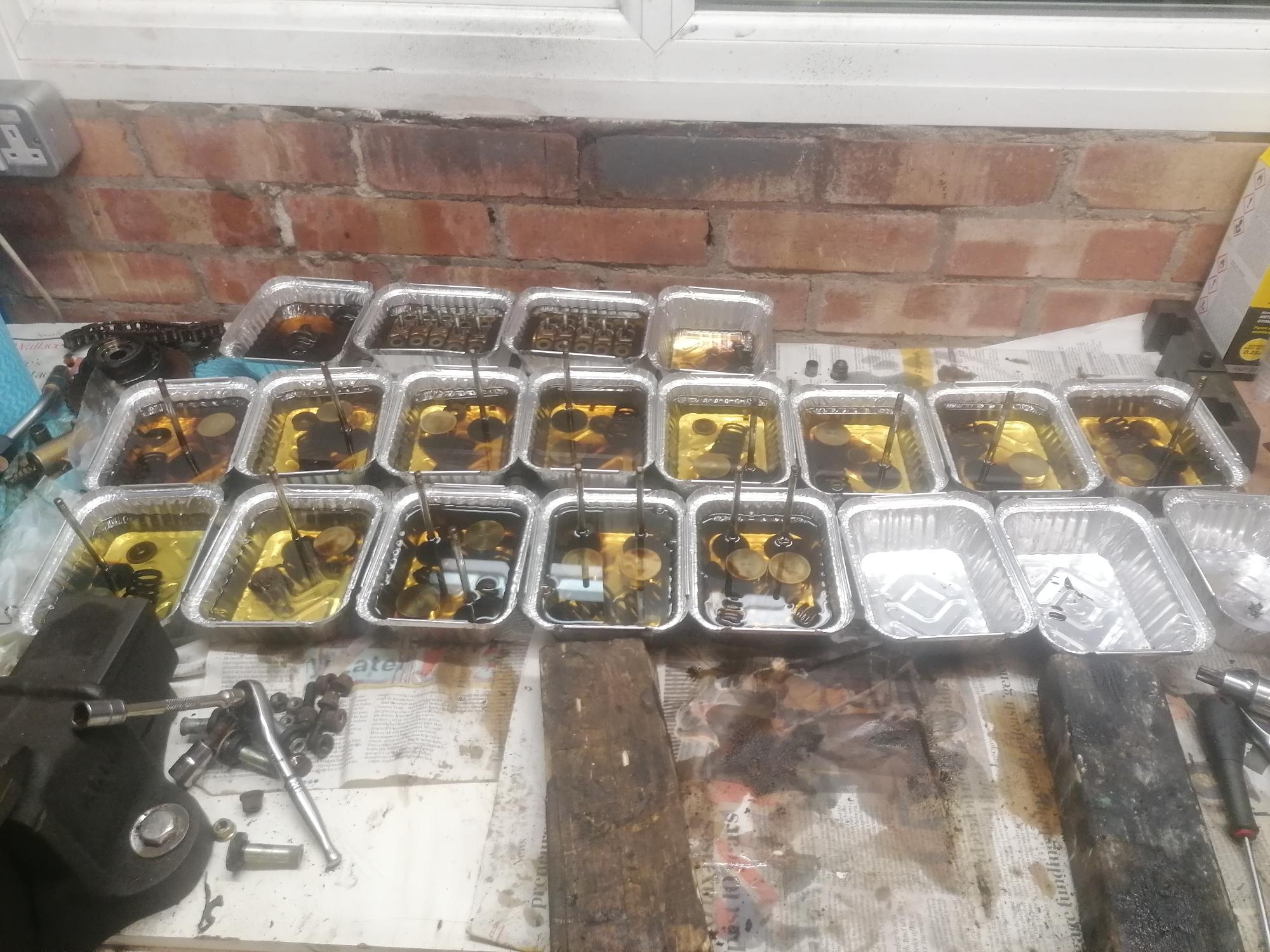 all the valves and other head components are also in foil trays of kerosene, they'll be left overnight and tomorrow the carbon deposits will just brush off and I'll give them a clean up with scotchbrite pads.

Hopefully I'll get the gasket mating face cleaned up and the head pressure washed tomorrow, I'll then measure the head for flatness, the tolerance on tis is 0.05mm I expect this head to be fine, it shows no signs of head gasket failure all 4 cylinders appear exactly the same with no obvious issues.